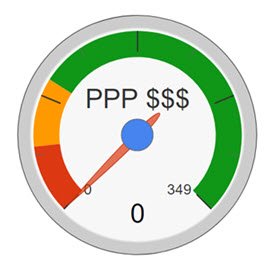 With the Protection Payroll Program (PPP) out of funding and the SBA releasing data on $342 billion of loans, a mosaic is starting to emerge of the winner and losers in the program. We were able to draw some conclusions and make some predictions we hope you find useful.

1) Banks prioritized – Not only did banks prioritize their customers over non-customers, they also put their bigger customers ahead of their smaller ones. Businesses with over 200 employees were over 3 times more likely to have their loan processed and approved than small companies with 15 or fewer employees – a whopping 79% percent of business with over 200 employees had their loans approved. Only 24% of businesses under 15 employees received a PPP loan. While businesses under 15 employees did receive 74% of the loans that were issued, there are 5.1M firms this size.  Also, businesses over 200 employees only received 2% of the loans issued, but there are only 32K of them and 20K or 79% of these firms did receive loans.

Many small companies who did not have strong banking relationships with banks participating in the PPP program or self-employeds who couldn’t enroll prior to April 10th were left scrambling to find a lender to take their applications. The Treasury’s move to allow FinTechs (such as Paypal, Square, and Intuit) to join the PPP program will help those lightly banked if there is a second tranche of funding, but we note that even most FinTechs are starting with the their existing customers first before branching out to non-customers in desperate need of financing.

2) Rural ruled – Rural states (e.g., Nebraska, North Dakota, and South Dakota) had a much higher percentage of its small businesses receive PPP loans than urban states (e.g., New York, California, and New Jersey). Pure speculation on our part, but this could be do to a higher concentration of community banks in rural states so throughput was much higher (and wait times lower) than urban borrowers waiting in long online portal lines.

3) Disproportionate industry participation – Some industries participated disproportionately more than others – manufacturing, retail, and construction participated heavily; wholesale trade, management companies, and finance and insurance didn’t. Some of this discrepancy can be explained by what industries were not allowed to participate (many financial firms were excluded via the CARES Act).

4) Loans will stay – Many businesses will not see their entire SBA loan forgiven without Congressional tweaks to the program. Some may owe between 10% to 30% or more of the loan amount after the 8-week period due to:

1) Lack of demand – Many businesses will not see robust demand for their products or services while coronavirus rages and will be reluctant to rehire laid off workers in the weeks and possible months ahead dampening the achievement level of the program in the first place – rehiring workers.

2) Lack of supply – Many businesses will have difficulty rehiring due to robust federal and state unemployment compensation that in many cases is more than their pre-coronavirus wages. In some states workers will earn roughly $1,000 a week from unemployment.

Businesses that are most negatively impacted are those with very low rents and utilities (e.g., a home-based business or a rural business) since they don’t have non-payroll costs that can offset the 74% shorter period. There are politicians in Washington that are aware of this “math problem” so Congress may take action to alleviate this pain point by allowing more than 8 weeks of costs to be included in the debt reduction but as of this writing that relief has not been enacted.

5)  Applications are backed up – Plenty of loan applications backed up in the queue at the various banks. Bank of America, one of the largest banks in America and the first of the four big banks to accept PPP applications aggressively, tweeted on April 4th (the second day of the PPP program) that it had received over 145K loan applications totally $30B. Fast forward to April 16th and the #2 lender per the SBA only did 32K loans totaling $10B. We assume this #2 lenders was BofA.  This translates to less than 1/3 of the applicant dollars BofA received the first 2 days of the program actually turned into SBA loans with E-tran numbers. Note that JP Morgan was #1 lender in terms of loan volume with 27K loans totally $14B.

6) $277 billion more needed – The Senate passed another $310 billion for the PPP program. The National Federation of Independent Businesses (NFIB) believes an additional $400 billion is needed to cover all small businesses in America wanting a loan. We believe the maximum potential needed is closer to $277 billion (before SBA processing fees paid to banks). Obviously 100% of businesses will not participate in the PPP program due to a variety of reasons such as ineligibility, out of business already, or opted for an EIDL loan.

7) $60 billion is symbolic – Congress set aside $60 billion to be allocated “small, rural, and community banks,” which is defined per the legislation as banks with less than $50 billion in assets. Congress recognized that the large banks with their large customers bases and technology prowess could overwhelm the smaller banks in the footrace for the PPP SBA loan funds since the program is still a first come, first serve affair. The $60 billion is largely symbolic as we must realize there are over 4,000 lenders participating in the PPP program — all but the top 38 financial institutions – are considered small. Put another way, Congress is stating that the top 38 banks can’t do more than 80% of the loans, and the remaining 4,000+ lenders can do 20% or more.

This symbolic move does not address the core problem with the musical chairs aspect of the PPP program – non-customers of banks have little to no avenues to obtain a loan. What is really needed is a protected allocation of funds to financial institutions who will lend PPP money to non-customers.

We may be able to answer any questions you have regarding our methodology if you contact us.

Table 1: Firm Size, Loan Size, # of Loans, $$$ Approved  are sourced from PPP Report. FTEs Covered is $$$ Approved / Average Payroll Cost (“APC”) per FTEs. We used an blended APC of $10,300 and adjusted per FTE per employer size based on Employment Size Report data (e.g., FTEs at companies with >400 employees make ~25% more than FTEs at companies with <15 FTEs). Data from tweets on April 10th from Edward Lawrence and Senator Marco Rubio indicate average per FTE of $9,800 and $10,300, respectively.  Avg FTE/Firm and # of Firms are from Census Bureau’s Employment Size Report. % Approved is # of Loans / # of Firms.