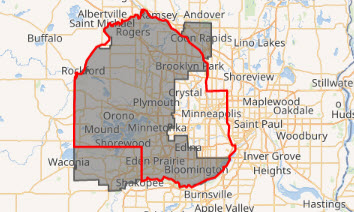 Take a poll among businesspeople nationwide and ask them where the best areas in the country are for job creation and you’ll hear several cities repeatedly mentioned: Austin, Phoenix, and Tampa. While these are certainly among the fastest growing cities in America, they’re not the leaders in a critical metric for any local economy: small business job creation.

The distinction of being the area of the U.S. leading in small business job creation as measured by the Small Business Administration’s 7(a) lending program is Minnesota’s 3rd District – for two years running. The 3rd District is by no means the largest district in the country, but it has proven itself to be the front-runner in entrepreneurship and small business growth. Finishing first two years in a row for job creation via SBA lending is quite an accomplishment given there are 435 congressional districts.

Minnesota’s 3rd District encompasses three counties north, west, and south of Minneapolis: Hennepin, Carver, and Anoka. It is primarily suburban in makeup, with a few farming communities situated on its far western edge.

The northeastern portion of the district includes several blue-collar cities, including Brooklyn Park and Coon Rapids. The higher-income communities of Eden Prairie, Edina, Maple Grove, Plymouth, Minnetonka, and Wayzata are located in the western part of District 3, and middle-income Bloomington is in the south.

The 3rd District is led by United States House Representative Dean Phillips, who has served in that capacity since 2019. Considering that COVID-19 struck in the spring of 2020, the fact that the district has flourished to such an extent under Dean Phillips is laudable.

A Minnesota native, Phillips has grown up around and understands business. He is the heir to the Phillips Distilling Company, was the co-owner of high-end gelato producer Talenti, and owns the local coffee shop chain, Penny’s Coffee. He earned his MBA from the University of Minnesota.

SBA loans have undoubtedly helped spur the burgeoning growth in the 3rd District. Understandably, bank loans have been more challenging to obtain for small businesses due to the coronavirus’ impact, but the fact that SBA loans provide a partial guarantee of up to 85% of a bank’s loan amount increases the propensity of lenders to approve loans for new and expanding businesses.

SBA loans are available in amounts up to $5 million. SBA Lenders is available to assist small businesses procuring loans in a wide variety of industries by providing access to lenders in their network.