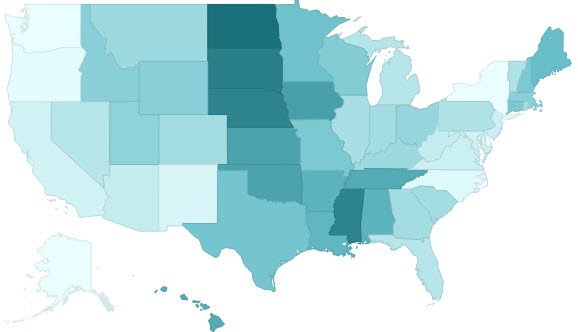 The Small Business Administration (“SBA”) released updated results by state for the $659 billion SBA loan Payroll Protection Program(“PPP”) by state. We have just completed a study of the data supplied thus far and have reached the following conclusions:

The data after the first tranche of $349 billion of SBA loans….

… and after $510 billion total from rounds 1 and 2 has been allocated:

The outperforming states have been the rural and plains states dominated by smaller community banks.

There was more movement in the underperforming list from round 1….

As expected, states that dramatically underperformed during the 1st round did better in the 2nd round. Many of the states that saw their small businesses shut out during the stampede of the first round of SBA loans did see much higher percentage of their businesses funded in the second round (e.g., only 20% of Washington businesses were funded in Round 1; 41% have received funding in Round 2).

Most of the negative commentary regarding the PPP program was the perception that banks prioritized their largest customers first. The breakdown of loans made between the two rounds…

For small firms with under 15 employees…

… clearly the number of very small firms received loans actually increased significantly in the second round of PPP loan allocation even though only half of the $310 billion has been allocated. We expect this trend to continue because most of the large firms have already received loans:

… as well as average size of small businesses receiving an SBA loan:

The stratification of both rounds of funding shows that 87% of the largest eligible PPP borrowers have already been approved for loans, while 75% of the smallest firms have received loans:

Per the U.S. Census Bureau there are approximately 60.5 million employees working at firms with 500 full-time employees or less.  Also, there are approximately 5.5 million workers in the hospitality and food industries (i.e., NAICS code beginning with 72) whose firms are also eligible for PPP SBA loans. We estimate 50% of  NAICS 72 companies are eligible for PPP.  With an average PPP loan per FTE of $10,000,  we estimate a maximum of $633 billion is needed (before any SBA loan fees paid to banks). Consequently, the $659 billion already allocated by Congress may suffice especially after considering participation won’t hit 100%.